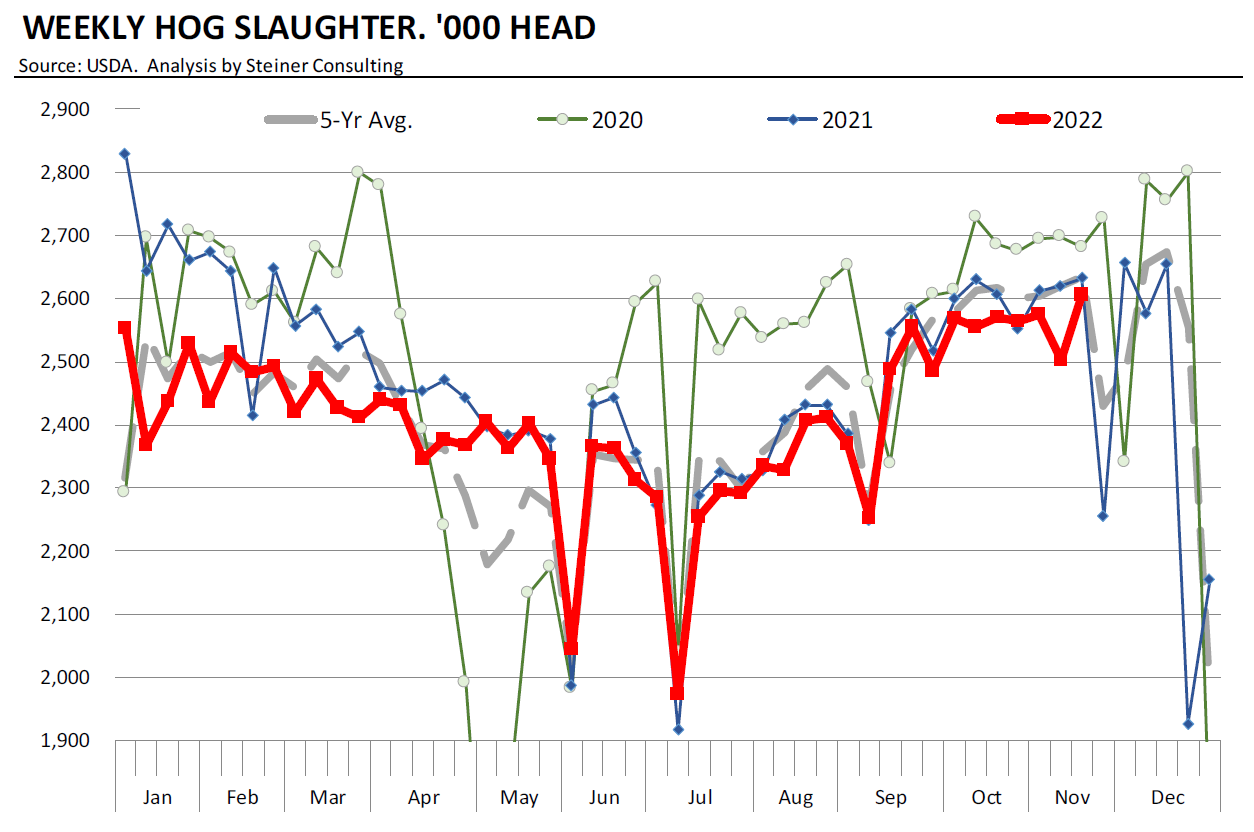 Tight supply remains despite packers ramping up slaughter ahead of the upcoming holidays.

In early fall, we noted that expectations for a fade in pork prices in late November and December hinged in part on the normal increase in production that takes place during this time of year. However, the supply picture seems a bit more complicated and the lower slaughter numbers in recent weeks confirm that. For the period between October 16 and November 19, total hog slaughter was 12.818 million head. That is down 205k head or 1.6% compared to a year ago. This is higher than what we would have expected based on the latest USDA hog inventory survey. That survey pegged the supply of hogs weighing between 120-179 pounds at 14.073 million head. That is 1.2% lower than a year ago.

The lower supply means packers do not have to run as many shifts on Saturday (see chart above). This tends to drive more price volatility as retailers and processors that normally get deliveries on Monday are finding a tighter spot market. The fact that slaughter is lower than the survey suggests while weights are moving sideways suggest tight hog supplies in the near term.

It can be argued that high feed costs may have resulted in a change in feeding. That means a change in the timing of when hogs show up in the market. In our view that’s highly speculative and we don’t know of any data that support this. The only way to know will be in hindsight. For now, the info that is available is the survey done back in September. That tells us not to expect the supply situation to get much better, with hog slaughter through February running about -1.5% y/y. During Jan-Feb of 2022, weekly hog slaughter had an average of 2.476 million head/week. The current estimate is for slaughter to run around 2.44 million head/week during Jan-Feb 2023.

As is often the case demand will be a key focus for market participants. There is some speculation (hope) that China will be back buying pork, but recently hog prices in China have been trending lower. Will Chinese officials start to loosen up some of their COVID restrictions? Maybe, but so far all those guessing about this have been wrong. Sales during the Chinese Singles Day shopping festival apparently were disappointing and Ali Baba (the Chinese version of Amazon) for the first time decided not to disclose sales.

As for domestic demand, retailers will look to cover some of their Easter ham needs in late December and January, as they usually do. But the price picture today is far different than in June and July. Will the higher prices cause some pushback in the quantity demanded? Will the higher prices affect demand from Mexico? They are all hard to answer questions and something traders will continue to debate, especially since last year’s market was set up for lower prices only for people to get caught short, setting up a big rally in February. For now cash hog values have stabilized but have yet to break and the light slaughter last week should help underpin cutout values in the near term.