The Other White Meat® Brand - Pork Checkoff
Skip to content

The Other White Meat® 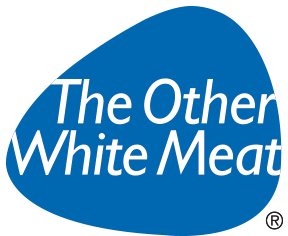 When launched in 1987, the goal of the Pork. The Other White Meat® tagline and supporting campaign was to increase consumer demand for pork and to dispel pork’s reputation as a fatty protein. The Other White Meat was developed to position pork as a good-tasting, versatile and nutritious meat that is easy to prepare and appropriate for any meal.

The tagline was certainly successful in positioning pork as a lean protein and an excellent choice for all meal occasions. The tagline is a symbol of the successful evolution of lean pork products available today and its contribution to pork becoming the world’s most-consumed protein. A study released in 2006 by the USDA states that six common cuts of fresh pork are leaner today than they were 15 years ago — on average about 16% lower in total fat and 27% lower in saturated fat. In addition, pork tenderloin is now as lean as skinless chicken breast. The study found a 3-ounce serving of pork tenderloin contains only 2.98 grams of fat, whereas a 3-ounce serving of skinless chicken breast contains 3.03 grams of fat.

The Other White Meat continues to have high consumer recognition and is an incredibly valuable asset to the pork industry. In the Fall of 2021, the Pork Checkoff leveraged the strong recognition of the tagline with Gen X audiences to launch a fun and nostalgic throwback campaign which reinforced that fresh pork cuts are safe when cooked to 145 degrees with a 3-minute rest.