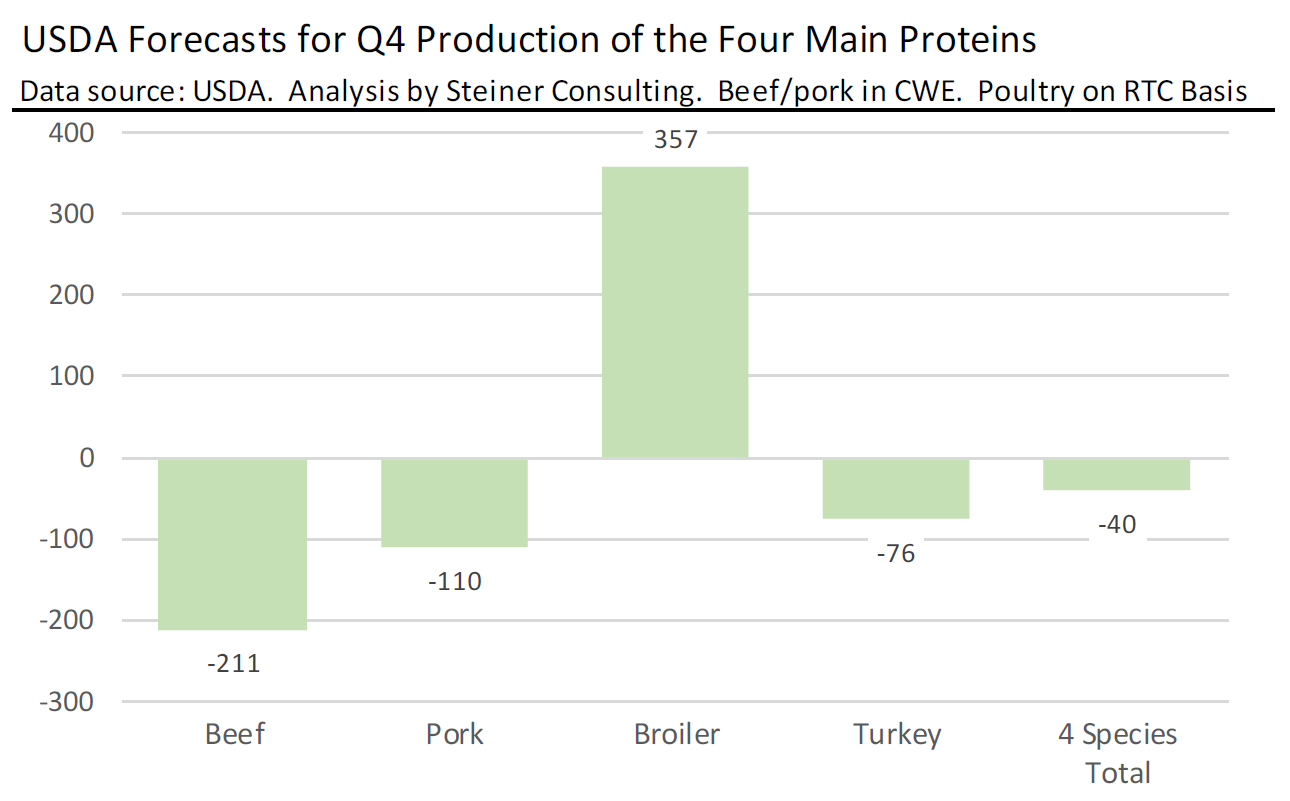 Fresh pork prices continue to be pressured lower due to increased competition from chicken breasts at retail and seasonal decline in demand.

We are now one month into the final quarter of the year and pork output is expected to be down 110 million pounds or 1.5%. Beef output is expected to be down 211 million pounds or 3%. Higher chicken production is set to offset the decline. USDA thinks that Q4 chicken production will be up 357 million pounds. That is 3.2% compared to the same period a year ago. For those that think this forecast may be too aggressive, think again. Chick placements in recent weeks have averaged 5% above year ago levels. This implies a robust slaughter pace through at least late November. More importantly, the broiler hatchery flock is running above year ago levels and the hatching rate has improved – coincidentally at same time that plants have become better staffed. Add to this heavier broiler weights and even the seemingly “aggressive” USDA forecast may not be high enough.

The USDA forecast for a 3% decline in beef production may end up higher. Feedlot inventories are near year ago levels. We have yet to see packers slow down the pace of fed cattle and cows coming to market. Indeed, for the week ending October 22, beef cow slaughter was almost 85k head. That is up by double digits compared to a year ago and the highest weekly beef cow slaughter since 2011.

As for the decline in pork production, for the most part it is in line with expectations from the September Hogs and Pigs report. Despite the decline in pork production, loins, butts and ribs are at or below year ago levels. Retailers have seen very aggressive pricing on chicken breasts and thighs for near term futures. This may have negatively affected demand for these items. And with the holidays ahead, loins and ribs may find it difficult to get much traction.

But while production gets a lot of attention, carryover inventory and exports are important. Meat protein output in Q4 of this year is expected to be just slightly lower than a year ago. However, there is substantially more meat protein in cold storage. This is a concern for end users that own that inventory and fear a slowdown in demand may cause them to mark down its value. Keep in mind that production and trade data is on a carcass weight or ready to cook basis. The cold storage data, however, is on a product weight basis. If we were to convert the cold storage numbers to equivalent units, the volume would look even bigger. But even as currently reported, the combined supply of the four main proteins at the start of Q4 was 268 million pounds. That is 13% higher than a year ago. Supply of beef, pork and chicken was up double digits from last year.

USDA thinks pork exports will be up in Q4, with Mexico and possibly China buying more pork. This will help the pork market and hog futures for Dec are up substantially vs. year ago. But chicken and turkey exports are forecast lower. So, while the supply situation for some items may still be tight, the overall domestic protein supply shows a significant improvement compared to last year’s levels.

Finally, we wanted to highlight the fact that hog producers remain extremely current. Additionally, we are starting to get reports of more cases of PRRS affecting farms. Normally hog carcass weights move higher in late fall and winter. That is due to hogs getting fresh new corn and enjoying the cooler temps. But the average weight of producer owned hogs going to market last week was little changed from two weeks ago. It is now down 3.7 pounds or 1.7% compared to a year ago.

Producer supplies in parts of the country have been tight for much of the year. Current trends suggest that packers will be forced to pay up for hogs. Seasonally, hog supplies decline in Q1. The latest Hogs and Pigs report suggested supply in early spring could be down as much as 2.5% y/y. With pork supply constrained, demand remains critical for producers and end users alike.

Supply Picture Remains Tight, With Demand a Wild Card After the Holiday Season

Strong Ham Prices Underpin Hog/Pork Prices in the Near Term