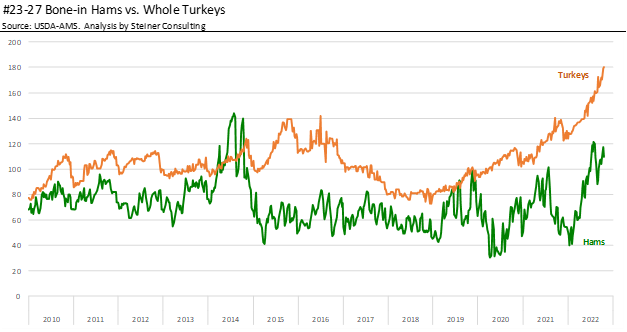 Slaughter is down almost 5% from 2019, exports to Mexico are record high, turkey prices are record high and cold storage inventory is down double digits. Expect ham prices to remain firm through the holidays this year.

Ham values have surged higher in the last few weeks. The gains have not only helped steady the overall cutout, but they have forced market participants to rethink their ideas about hog prices this December. At the start of this month the December lean hog contract was trading under $76/cwt. On Friday (10/21), December futures were over $89/cwt, a 17% gain. For futures traders the question right now is whether current ham values are sustainable, at least through early December.

Processors have the same question. We believe there is a good chance that ham prices will hold up well above $100/cwt through early December. This would justify pricing the cutout in the mid to high 90s and support lean hog prices in the mid to high 80s. Back in July, our forecast for #23-27 ham prices for November was $108/cwt and for December it was $103/cwt. That is almost a 90% increase year over year. Bullish as that forecast was, it appears it may have not been enough. Below are some of the factors that we see continuing to underpin ham values (and thus pork cutout and hog prices) through early December.

This is something that is getting a lot of press, especially with Thanksgiving dinner only four weeks away. The loss of 5.4 million turkeys in the spring was seen as driving turkey prices higher through the holidays. The situation has become even worse in the last few weeks, with another 2.2 million turkeys lost in September and October. Whole turkey prices (see chart below) are currently at $180/cwt, a record. High as ham prices are currently, they are not especially expensive relative to current turkey prices, with the price multiple at 0.6. That is on the low end of the 15-year range.

There was some speculation that high ham prices would start to ration out Mexican demand. So far that has not happened. USDA reported that sales to Mexico in the last five weeks have averaged 15,800 MT/week compared to an average 14,200 MT/week the same time last year. China was a major buyer in 2019, contributing to the surge in ham prices that year. We would argue that demand from Mexico is even more significant for ham values as about 70% of our exports to that market tend to be hams.

Holiday Demand for both Thanksgiving and Christmas

While we expect ham values to be notably lower by the second half of December, seasonally prices trend higher in early November and are only modestly lower in late November and early December. In 2019 prices in the second week of December were down 7% from their peak in mid-November. A similar trend this year would put prices for #23-27 hams in early December at around $107/cwt.

Packers and processors normally accumulate hams in the spring and summer to meet the surge in demand later in the year. High prices this summer, however, limited inventory building. At the end of August, inventories were down 12% from a year ago. We expect inventories at the end of September to be down 12.7% compared to last year and 14% lower than the five year average. Lower inventories are forcing processors to rely on the spot market more at a time when kills are down and exports firm.

The latest USDA inventory survey indicated that hog slaughter through the end of the year would be down about 1.5%. So far slaughter has been running below that benchmark and 4.7% lower than in 2019.