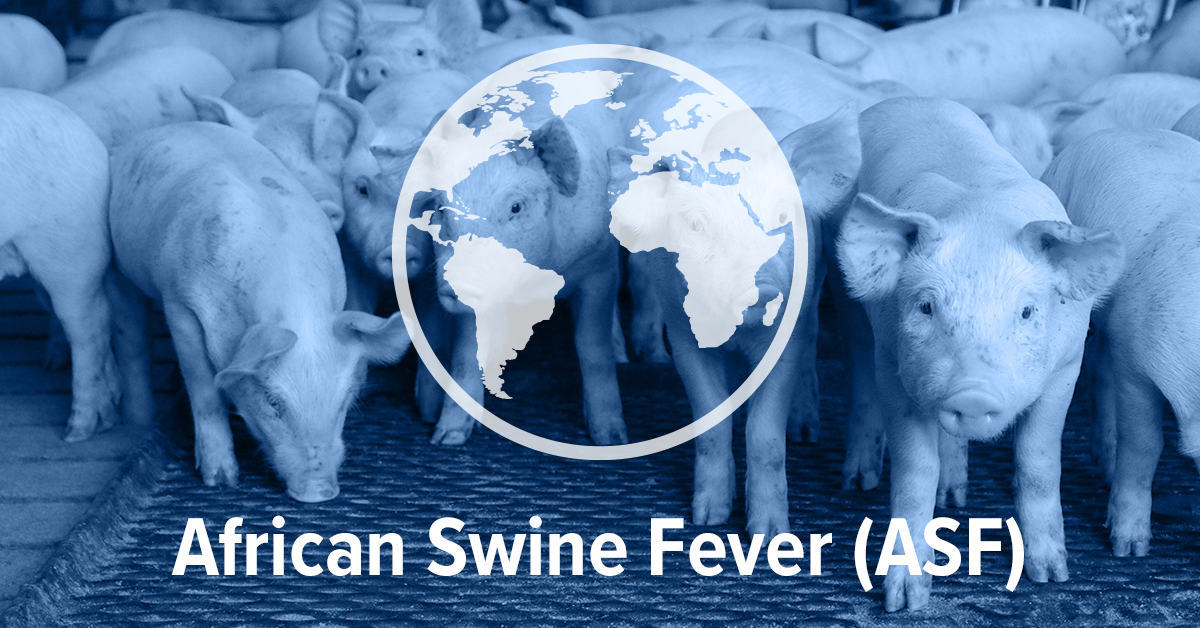 ASF confirmation in the Dominican Republic brings the devastating disease within 1,000 miles of the U.S. border. This new reality check puts foreign animal disease prevention and preparedness even more front and center.

While that news is still causing aftershocks globally, USDA’s announcement on July 28 of ASF confirmation in the Dominican Republic brings the devastating disease within less than 1,000 miles of home. This new reality check puts foreign animal disease prevention and preparedness even more front and center.

USDA’s Animal and Plant Health Inspection Service (APHIS) has numerous interlocking safeguards in place, such as the current cooperative surveillance program to prevent ASF from entering the United States. Pork and pork products from the Dominican Republic are currently prohibited entry because of existing classical swine fever restrictions.

“The USDA-APHIS announcement about ASF cases in the Dominican Republic reminds us how important it is to be diligent about foreign animal disease awareness and preparedness,” says Patrick Webb, DVM, Acting Chief Veterinarian of the National Pork Board (NPB). “Producers can help protect their own operations and continuity of business for the pork industry by remaining vigilant and participating in your state’s Secure Pork Supply efforts.”

Within a few months of China’s 2018 announcement, ASF had spread to all corners of the country. Tens of millions of hogs died or were depopulated. Some estimates put the losses at half of China’s hog herd in that first year.

And the ASF virus did not stand still. It can now be found in more than 50 countries worldwide according to the World Organization for Animal Health.*

Concern over the devastation prompted new ASF-focused preparedness and research for the U.S. industry. According to a 2020 study by Dermott Hayes, Iowa State University economist, the economic impact of an ASF outbreak within the U.S. pork industry is estimated at $50 billion over 10 years. This can be attributed to several factors, including an immediate shutdown of all pork exports. With nearly 30% of U.S. annual hog production headed for exports, the business impact would be tremendous.

Since the first case of ASF was announced in China, NPB has deployed people and resources to fight FADs. Specifically, Checkoff-funded work has resulted in:

ASF Across the Globe

Beyond China, the ASF virus continued to spread into countries as varied as Vietnam and Poland. This has caused worldwide angst about where it would appear next.

Vietnam was hit hard in the last few years and lost almost 6 million pigs in 2019. Earlier this year, Vietnamese officials reported new cases in more than 20 regions. With its commercial pork production having similarities to U.S. systems, the two nations have teamed up to conduct research projects to help combat the costly disease.

Europe’s struggle with ASF continues on multiple fronts. The European Commission’s (EC) Animal Disease Information System reported 510 outbreaks in domestic pigs through early June, plus Germany’s first three cases in its domestic herd were reported in mid-July. That compares to 1,240 total outbreaks for all of 2020. New cases were also reported this spring in domestic pigs in Romania, Ukraine and Poland. Additional challenges are coming from “backyard” herds, outdoor production and wild boar populations.

Wild boar populations are posing the highest risk of spreading ASF to the commercial herd in Europe. The EC’s disease system reports 6,965 ASF outbreaks among European wild boar through early June of this year – 306 more than during a similar period in 2020. The countries registering the most ASF outbreaks in wild boar populations so far in 2021 are Slovakia, Romania, Germany, Poland, Bulgaria, Latvia and Lithuania. Other countries – Estonia, Italy and Serbia – have had cases this year, but to a lesser degree.1

While ASF continues to get a lot of attention as it spreads across Asia and the European Union, there are other FADs that would have a similar economic impact and cripple the U.S. pork industry, including:

NPB, along with its partners, is committed to preventing and preparing for all possible FADs.

While no commercial vaccines are currently available to prevent ASF from spreading, there is a collaborative effort in vaccine development research. Additionally, NPB uses Checkoff funds to fill the research gaps.

There has been headway in identifying technologies to use with vaccine candidate strains, and USDA and foreign partners are testing vaccines in the field. NPB is currently requesting research proposals to fund additional ASF vaccine research. The proposal submission period ends at the end of August.

The challenges for USDA and pharmaceutical companies have been identifying which strain of the virus to test and create immunity.

Challenges also exist with unauthorized vaccine development and use overseas. China’s Ministry of Agriculture and Rural Affairs punishes illegal production and sales of vaccines with heavy fines since it damages the recovering industry and increases hidden risks like more cases or potentially a new, chronic form of ASF.

The timeline for vaccine development is unknown, so producers should remain vigilant. Registering for an AgView account and participating in the Secure Pork Supply action plan are measures to take today.

From purely a business perspective, China’s battle with ASF has benefited the U.S. pork industry. The ASF-caused pork shortages created a significant protein gap around the world and changed global trade flows. In response, China aggressively shopped for supplies in the global market, with record-setting pork imports in 2020.

According to Brett Stuart, Global AgriTrends, China is recovering from ASF and its exports will decline from 2020 highs. He said, “Chinese hog prices have dropped 58% since January. With the big shift in Chinese hog prices and the 2021 inflation of U.S. hog prices, we expect Chinese demand for U.S. pork to moderate in the coming months.”

While exports are below 2020 levels, they remain historically high. The January-through-May 2021 exports accounted for 30% of total U.S. pork production at 2.97 billion pounds.