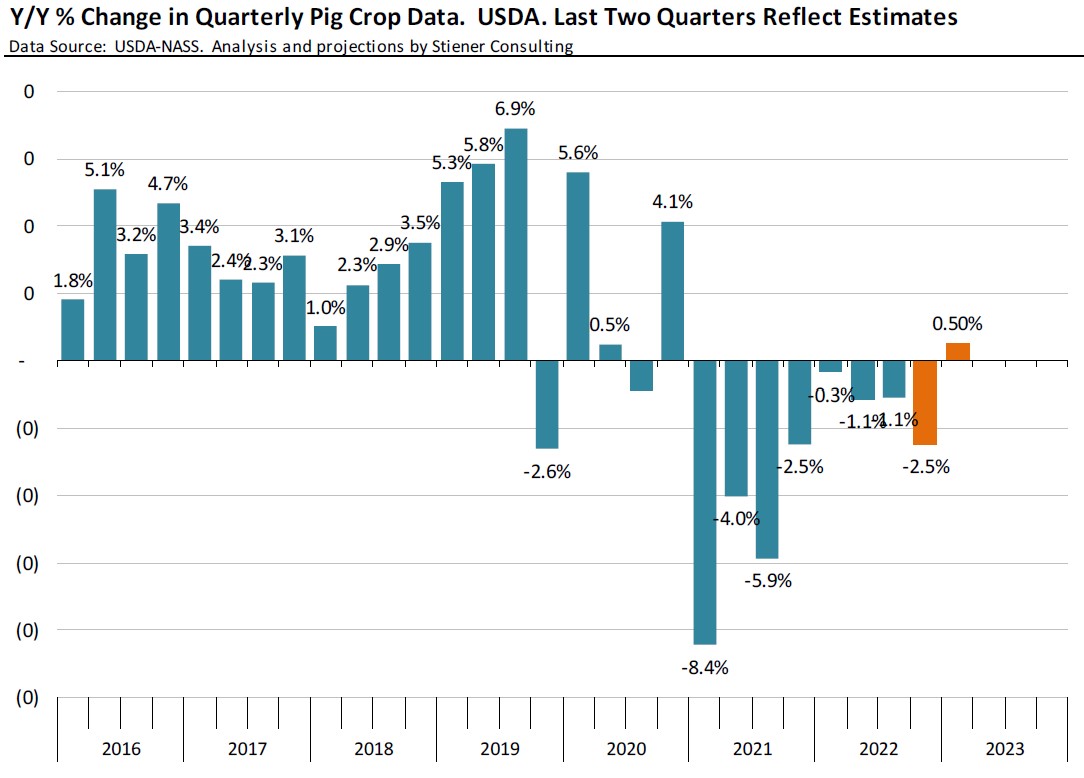 Hog breeding herd as of September 1 was estimated down from the previous quarter as well as 0.6% lower than a year ago. The pig crop through next Feb is expected to decline y/y, suggesting no supply growth through next summer.

Hog futures have declined recently due to the seasonal decline in pork prices and concerns about domestic and export demand. We remain bullish vs. current futures in our forecast. That is mostly because we think retail demand will be less vulnerable to an economic slowdown but also because pork prices at retail have not increased as much as other proteins. We also see export demand for next year holding up better than USDA is currently forecasting. That is due to lower supplies in the EU and some improvements in Chinese import demand.

There was significant uncertainty about the size of the breeding herd among analysts. Some were even thinking the breeding herd could register an increase. Producer margins were positive during the Jun-Aug quarter, which normally would provide an incentive to retain more gilts. However, producers continue to struggle with several challenges: high feed costs, a tight labor market, uncertain export demand and regulatory ambiguity (CA Prop 12). This has prevented producers from expanding and we think will keep breeding herd numbers and pork production in check for all of 2023. On this latest point, the US Supreme Court will hear a challenge to California’s Proposition 12 on Tuesday. However, the court will not make a decision until Q1 of next year. No decisions on expansion will be made until there is some resolution to this case.

In the most recent USDA report, producers indicated that they expect farrowings (births) during the September through November period to be 2.973 million head. That is lower than the June estimate. If the number holds, it will imply a 2.5% decline in farrowings from a year ago. Given the reported size of the breeding herd on September 1, the farrowing rate calculates to 48.3%. That is one percentage point lower than a year ago and two points lower than the levels routinely achieved in previous years.

Non-holiday weekly slaughter for Mar-May 2022 averaged around 2.4M head/week. This report would suggest a weekly kill of around 2.34M. We think this supports hog prices above the current April futures of $85/cwt. But again, pricing recession and trade effects are tricky. Futures traders will wait and see how business develops in December before starting to adjust spring and summer premiums.

Farrowing intentions for Dec-Feb are more problematic since it’s more of a guess but at face value, they are bullish as well. Analysts thought we would see Dec-Feb farrowings up 0.5% y/y and coupled with a possible y/y increase of 1% for pigs per litter this implies summer supplies potentially increasing 1.5% vs. the previous year. The most recent survey pegged Dec-Feb intentions down 0.6%. This points to only a slight increase in hog numbers for the summer of 2023 and it is still unknown how producers will manage disease pressures this winter. Hog futures for next June and July are in the mid-90s, as opposed to the $110-$120 we saw this year. Barring a significant demand shock, we think fundamentally hog futures for next summer are also undervalued.

US pork exports in August were down almost 4% from a year ago as higher shipments to S. Korea and Mexico were offset by lower exports to Japan, Australia and a number of smaller markets. Exports of fresh, frozen and cooked pork in August were 173,335 MT (product weight), 3.9% lower than a year ago. Through August exports to Japan were down 11% compared to the same eight-month period a year ago and the decline accelerated in August (see chart above).

A strong US dollar and high pork prices over the summer likely contributed to the drop. We did not see much improvement in exports to Japan in September as weekly shipments in the four weeks ending September 29 were 5.6% lower than a year ago. The weakness in exports to a high-value market such as Japan was in part offset by more product going to Mexico. Total shipments to Mexico in August were 70,482 MT, 2.2% higher than a year ago. The value of pork export shipments to Mexico was $175 million, up $36 million or +26% compared to a year ago. This almost offset the $38.6 million decline in the value of exports to Japan. Shipments to Mexico in September averaged about 15% below year ago but the pace of sales in the last two weeks has shown a significant improvement, implying robust shipments through at least early November.