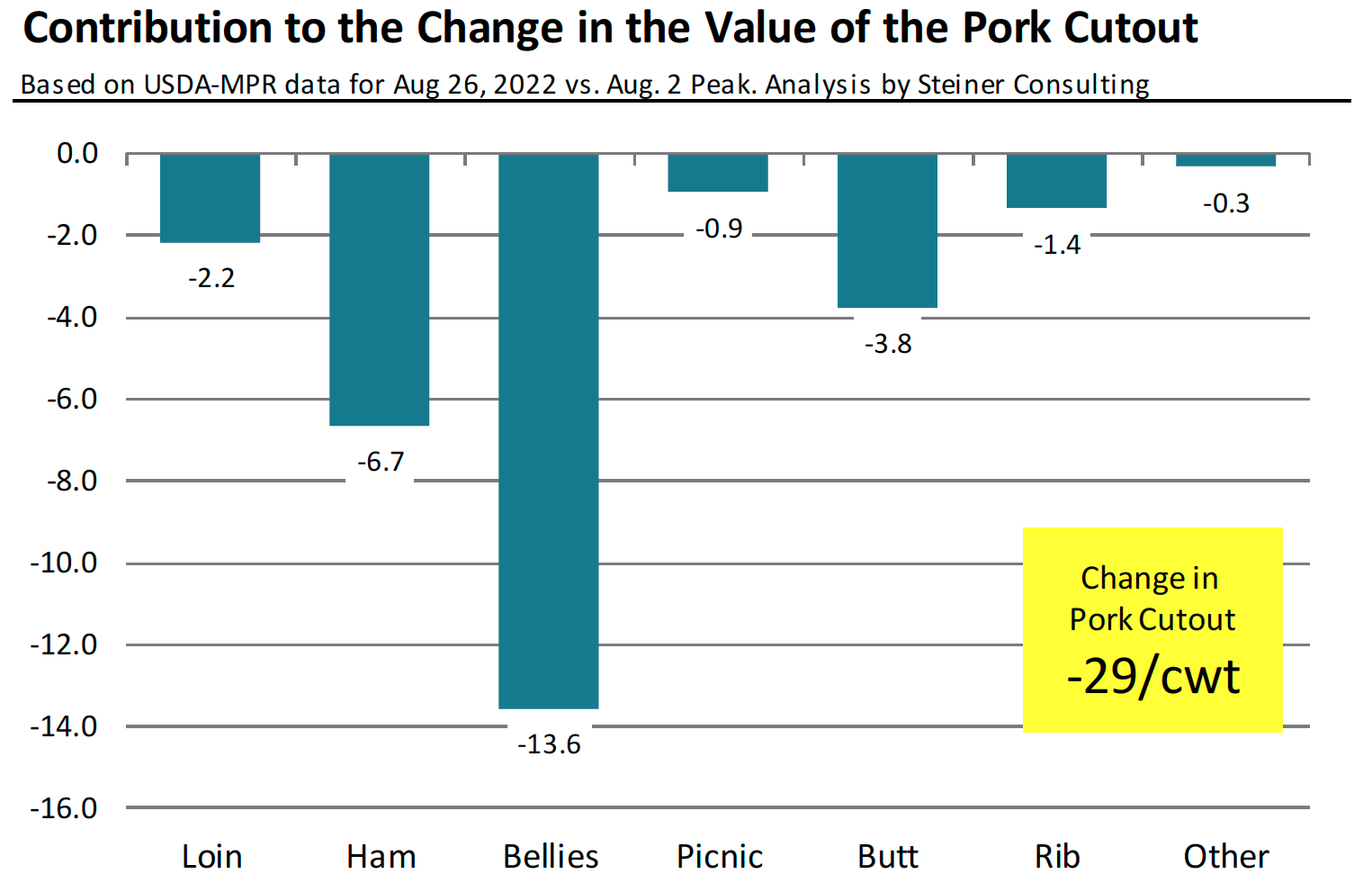 Due to the seasonal increase in supply, a slowdown in export sales and inventory depletion, prices collapsed far more quickly than expected.

Pork inventories at the end of July were 20% above last year, as well as above the five-year average. Normally, we see pork inventories decline from June to July. The 1.6% drawdown this year was higher than the average 0.8% drawdown of the last five years.

Ham inventories were 151.3 million pounds, 0.8% lower than last year and 9% lower than the five-year average. The ham inventory build rate was 8.6% in July, below the 11% average of the last five years. High ham prices in June and July most likely contributed to the slowdown in inventory building. This should also support better demand for ham in Sep/Oct as processors get ready for the surge in holiday demand.

The inventory of pork bellies in the freezer was 42.4 million pounds. That is 53% higher than a year ago and 18.6% higher than the five-year average. Inventories declined 20% from the previous month compared to an average 19% drawdown in stocks in the last five years. With hog slaughter expected to increase in September, we would expect processors to continue to liquidate inventories in the next few weeks. The inventory of pork trim in the freezer remains very heavy at 52.1 million pounds, 45% above last year.

Current high prices provide an opportunity to draw down this inventory. However, it is a bit of a surprise to us that we did not see more of that take place in July. We think the recent sharp pullback in part may be due to buyers rushing to liquidate inventories. Much will depend on the ability to liquidate stock at a time when production tends to seasonally increase. If more inventory carries into Sep/Oct, then pork prices may need to be even lower to clear the market.

There was a belief, or hope, or guessing, that high hog and pork prices would persist into fall. The break in futures a few days ago was blamed on speculators, but then came the sharp decline in the cutout mid-week. Speculators pushed the market higher through July, but they could not just ship fast enough at the first sign of trouble. We still think that pork demand is in good shape. The challenge, however, is that going into the fall supplies will increase. It happens every year, it will happen again this year. Seasoned market participants have seen this movie way too many times.

The decline in wholesale prices in the last few days had nothing to do with speculators, rather it was packers having to discount product to keep it moving. Sell it or smell it was true 30 years ago and it is still true today. It’s not a coincidence that the price decline on Wednesday, mostly in bellies and hams, followed a higher-than-expected slaughter the previous week at 2.395 million head, three robust slaughter days on Monday (478k head), Tuesday (480k head) and Wednesday (480k head).

Packers decided to run almost no slaughter on Saturday given current poor margins. But, the damage was already done during the week. The light kill on Saturday should help steady the market early next week but with a holiday-shortened week coming up, packers will likely keep slaughter at +480k per day next week as well. Wholesale pork prices are now back at attractive levels. However, buyers may sit on the sidelines for a bit longer, waiting to see product sales during the holiday weekend and also because of scheduling issues. We expect wholesale prices to trade better the following week.

The risk in the hog market all along was that prices peaked in early August rather than early July. This means that by the time buyers reacted to high prices slaughter would be seasonally higher. The pork cutout peaked on August 2 at $131/cwt but since then it has lost $29/cwt or 22%. A big chunk of that decline happened on Wednesday, with the cutout down $12.5/cwt or 11% from the previous day. By the end of the week, the cutout was down 12.7% from the previous week. Ham primal was down 17% and belly primal was down 18% in just 5 days.

Lower belly prices have been the main contributor to the decline in the cutout (see chart on page 2). The belly primal on Friday was quoted at $156/cwt, 35% lower than it was on August 2. Bellies have contributed $13.6/cwt to the overall decline in the cutout. Lower belly prices in May and June likely drove sales and features for July and August (see chart). But at some point, retail ads are done and now packers once again are looking to move product.

Processors are looking at holiday shortened production coming up. They are more interested in cashing out of their inventories, especially after the recent break in futures. Inventory of bellies in cold storage at the end of July was 42.4 million pounds, 53% higher than the limited supply a year ago but also 19% higher than the five-year average. This is the wrong time of year to get someone to put bellies away and between fewer processing shifts and seasonally higher slaughter prices often have to adjust sharply in order to get the product sold.

Hog supplies are likely to be lower than a year ago in the fall but weekly kill by mid-September could be as high as 2.5 million head. Cooler temps will also result in improved performance. Hog weights have already started to trend up and will accelerate. If producers stay aggressive in marketing hogs and stay ahead of the seasonal gains in weights then they stand a good chance to get higher prices for their hogs than they did a year ago. Belly prices are once again at attractive levels. Keep in mind that last year processors took advantage of a similar pullback in August to drive sales for October.

Supply Picture Remains Tight, With Demand a Wild Card After the Holiday Season

Strong Ham Prices Underpin Hog/Pork Prices in the Near Term